When to use a Heat Treated Expanding Collet

I get a few phone calls from customers every year regarding breakage issues with our Expanding Collets or the collet growing to the point that you can no longer get the part on the collet. Read on for a couple of simple solutions to these two problems. 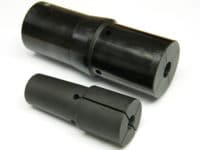 Let’s begin with the breaking problem: 99.9% of the calls I get, are regarding an application in which the customer has a bore diameter that is close to the minimum diameter that the collet can be turned down to. An example would be the following: You have a part that has a .400” ID and the bore length which needs to be held is .600”. The recommended collet for this application would be our 1×1-2 Expanding Collet. The problem with this particular situation for this collet is that it is only machinable down to .375”. Remember that in this scenario the bore ID is only .400” so you will only be left with around .025” of material between your part and the expanding screw. Being that the collet is going to be turned back .600”, you now have a situation in which the segments of the collet become very weak and will most likely break. To remedy this, we offer a 1×1-2HT heat treated expanding collet. This collet is made from 4130 and heat treated to a 36-38RC. With this configuration, you now have a collet that is much stronger, thus eliminating the risk of breakage in most cases. It even will last longer for you.

Argggghhh! My collet is Growing! In some cases a phenomenon occurs in which the collet will no longer return to its original position when the collet is released. This can be caused by a few different issues. For example, if you have a long run job in which you will be clamping and unclamping the collet over several hundred to several thousand parts, it can cause the collet to not return to it original position, even to the point where the part will no longer slide over the collet. We refer to this as “collet growth”. This happens because the material used in the manufacturing of the expanding collet “fatigues out,” or in other words it loses it memory. By switching to a heat treated collet made from 4130/4140, you will find that the life cycle of the collet is greatly extended. Another issue which may cause “collet growth” is the amount of pressure used to expand the collet. Today’s CNC lathes have the capacity to have several hundred pounds of pulling force on the draw tube. If you’re running a job in which you need to have a lot of holding force to insure the part will not slip on the collet, you obviously have to set the hydraulic actuator accordingly. The final result can induce enough stress into the expanding collet causing it to swell or grow in the unclamped position, making it impossible to get another part to slide on the collet. Switching over to a heat treated expanding collet would eliminate this problem!

We stock a few sizes of our expanding collets in a Heat Treated material. Do not hesitate to contact us for more info: 800-423-5145